Difference Between Breeding and Boarding Kennels

What is a Kennel?

The kennel is the shelter or the structure that is specially designed of the dogs and also for the cats. When being used in the plural figure, the term kennels refers to any building, or collection of property or building where in either the dogs or cats are being maintained, housed, and bred, but not in every case. A kennel may be made from any different materials and the most popular are the one made from canvas and woods.

It is the place where the dogs and the cats are being housed temporarily and absolutely for a fee, and this is considered an alternative instead of using one pet sitter. Even though lots of people are worrying about the stress being placed in the animals when they are left or situated in the most likely crowded and unfamiliar environment, but, the majority of the boarding kennels works to reduce this possible stress to animals. Many kennels give a one-on-one "playing time" just to get the animals out of the environment of the kennel. The familiar objects, like the toys, the blankets from home are being permitted in lots of boarding kennels. In the same way, lots of nowadays are also offering training and grooming pet services in addition to the boarding, with the thought being that a kennel may be the one stop shop of the owner for all of the three services.

On the other hand, in the United States, the word boarding kennel is being used also to refer to the licensing agencies and boarding Catteries and do not always discriminate between the commercial boarding kennel for the dogs and some other kinds of animals like for the cat boarding kennel. It has been anticipated that in previous years, people from the United States will spend around $3.29 billion just for grooming and boarding services. In year 2007 an actual market survey illustrates that $3.0 billion has been spent on this kind of services. The yearly kennel boarding operating expenses for the dog owners was about $225, and also for the cat owners were about $149 base on the 2007 to 2008 survey. 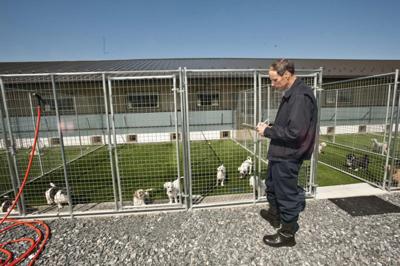 This pertains to the formal business for the promulgation of animals, and whether or not these animals had been actually housed in the separate shed, in the state of an art facility, in the garage, or in the family dwelling. The licensed breeding kennels had been heavily regulated and should follow related government legislation. The breed club members were anticipated to comply with the broad Code of Ethics plus the guidelines appropriate to the concerned breed. The Kennel council's can also stipulate the criteria that are needed to meet before giving registration papers for the puppies bred. The kennel name or the kennel prefix is the name that is connected with every breeding kennel. This is the initial segment of the listed name of the pedigreed dog that has been bred there. In the same manner, the cat registry is the organization that is registered cats for breeding and exhibition purposes. The cat registry is actually not the same with the cat club or the breed society. This is maybe associated with one or even more registries where in they have accommodate breed standards just to be able to display under the support of that registry.

Interested to know more about Dog Kennels help for your pet? Talk to CRUDELI KENNELS Home Away From Home Country-Style Dog Kennels in Mandurah.

Difference Between Breeding and Boarding Kennels

What is a Kennel?

What Are Dog Boarding?

In spite of the level of your adorati...

Pet services are the services given to the othe...

New Clients are more than welcome to view our kennels by appointment.